Skip to content
David Nelson Behind The Scenes, Eurosport, Other September 13, 2017December 3, 2017 4 Minutes

The 2017 British Superbike season is heading into its final stages, with the remaining three rounds forming part of the ‘Showdown’.

Silverstone was the last stop on the championship prior to the Showdown, and it was there where this writer was invited into the British Superbikes outside broadcast (OB) truck. Richard Coventry, who has been the television director for the MCE British Superbikes series for the past twelve years, is our guide to the Televideo truck.

The main component of any OB truck is the wall of video monitors, which is where most of the focus lies. At a very high level, the monitor wall is where the director can see the variety of sources. For Coventry and his team, this can consist of around 13 track cameras and two pit lane cameras.

The size of the operation massively depends on the series, those of you who read my MotoGP piece with Dorna’s Managing Director Manel Arroyo will know that Dorna have around 150 cameras per race! Nevertheless, the principles behind the outside broadcast truck are similar. 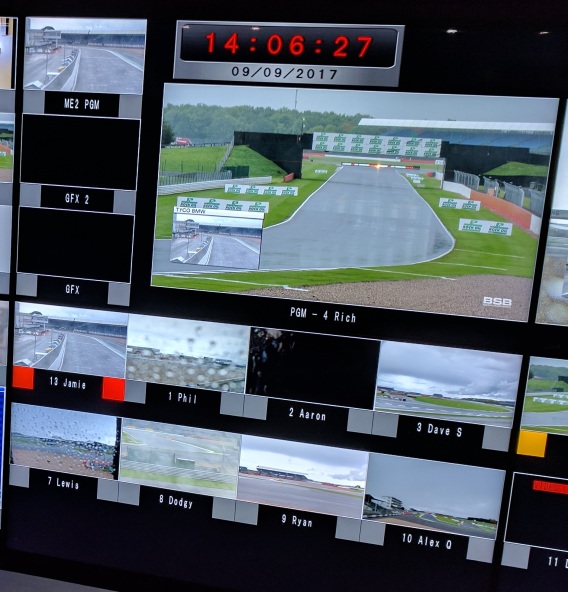 Centre left-hand side of the monitor wall. 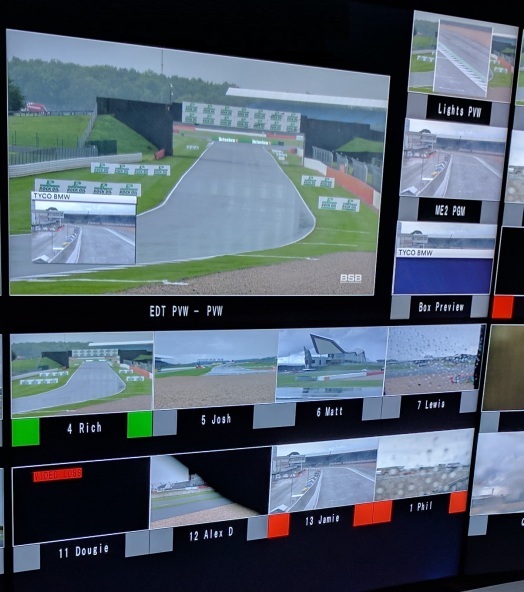 Centre right-hand side of the monitor wall.

“The monitor wall is a multi-viewer, so its eight monitors split with lots of sources. Every source that’s available to me in the vision mixer is on the monitor,” Coventry explains. There is a left bank (with two monitors), the four centre monitors seen above and a right bank (with two further monitors).

The centre bank of monitors is where Coventry’s attention is for much of the time. “I’ve got 13 track cameras directly in my eye line, underneath the main programme output (PGM). Next to that is the vision mixer preview (EDT PVW – PVW) so what is coming next,” Coventry says.

As you may expect, the track cameras are ordered by their position on the circuit. So, track camera one, controlled by Phil, is positioned at Copse (identified on the screenshot above as 1 Phil). Further round the track, Matt is controlling track camera six at Club opposite the Formula 1 pit lane, and so on and so forth.

A special case is track camera eight, identified above as 8 Dodgy. The reason for this is that the camera can double up and act as two different cameras. In this instance, the camera can see the bikes entering and exiting the arena section. This is common place at tracks where there are tight complexes, or the layout is small enough to allow multiple uses of one camera (the camera high up above the start-finish straight at Monte Carlo is another example of this).

The two graphic operators (GFX and GFX 2) sit up in Race Control with the time keepers. The left-hand and right-hand bank of monitors feature repeating sources. 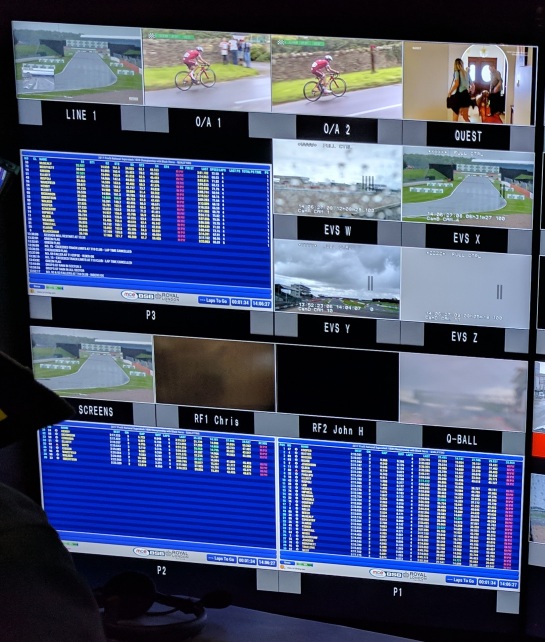 Left-hand side of the monitor wall. 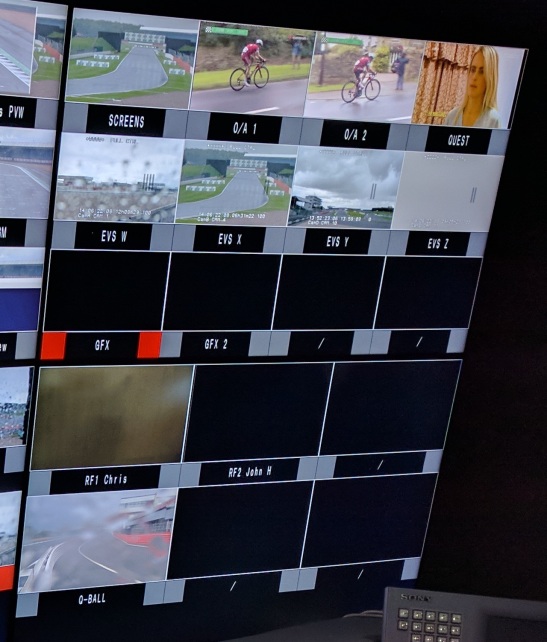 Right-hand side of the monitor wall.

“I’ve got four replay machines, which are called EVS W, X, Y and Z respectively. Each replay machine can record up to six sources,” Coventry explains. Both sides also contain the off-air output for the channels that British Superbikes are broadcasting on (O/A 1, O/A 2, and Quest), the two pit lane cameras (RF1 Chris and RF2 John) and the big screen output around the circuit.

Eurosport use the two pit lane cameras for their pre and post-session presentation, controlled also from the centralised OB truck. “Because of the unique way British Superbikes is run, as well as directing the race production, we also do Eurosport’s presentation. In MotoGP or F1, you would have a BT or Sky Sports truck and then an international World Feed truck, where the UK broadcaster would sit downstream. For the superbikes, unless there is a clash with World Superbikes, we do everything.”

The most interesting part of the side banks is a camera identified as ‘Q-Ball‘. “We control the Q-Ball camera from the truck. The camera this weekend is at Woodcote, coming into the start-finish straight, it’s very close to the track so we wouldn’t place a camera operator there, it gives us a fast speed shot,” Coventry notes. The benefit of doubling some elements up is so that nothing can be missed.

Lastly, specific to the left-hand side are the raw timing screens (P1, P2 and P3), and the final satellite output (Line 1). Adrian Bourne, normally sitting to the left of Coventry, will use the timing screens to keep an eye on any emerging battles and on any fallers. One thing readers may notice that is not here is any source on-board cameras. The reason is cost related: the cost of live on-board cameras for motorcycling is significantly more than their four-wheel counterparts. Some On-board footage however is produced for the BSB YouTube channel by Drift Innovation.

Below the wall of video monitors is a series of buttons, known more formally as the vision mixer, responsible for slicing the final live product together. There are four repeating banks, each correlating to the sources in the screenshots above. On each bank, there are buttons for the 13 track cameras, the two pit lane cameras and four replay mixers. “It’s layers of vision mixer, cascading into the layer below, so we can make layered complicated effects if we wanted to,” Coventry explains to me.

Each layer also contains a variety of lime green buttons, generated before the live show. “All the green buttons here are macros, which are things written in advance, they’re complicated moves that you wouldn’t be able to build live so we build them in advance. For example the start lights animation is a macro, the team boxes, changing the name of the team boxes, these are stored in the mixer, as is the BSB bug and the timing graphics as well.” 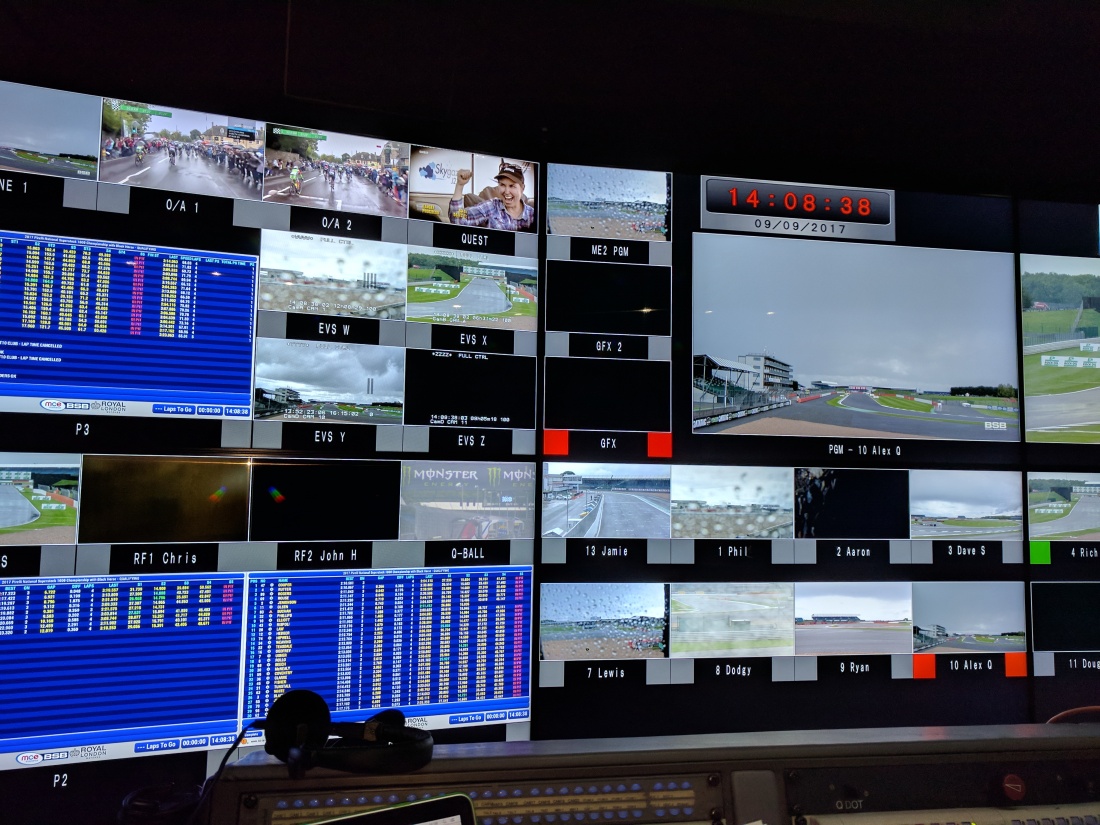 View all posts by David Nelson

3 thoughts on “Behind the scenes in the BSB OB truck: the monitor wall”

This site uses Akismet to reduce spam. Learn how your comment data is processed.